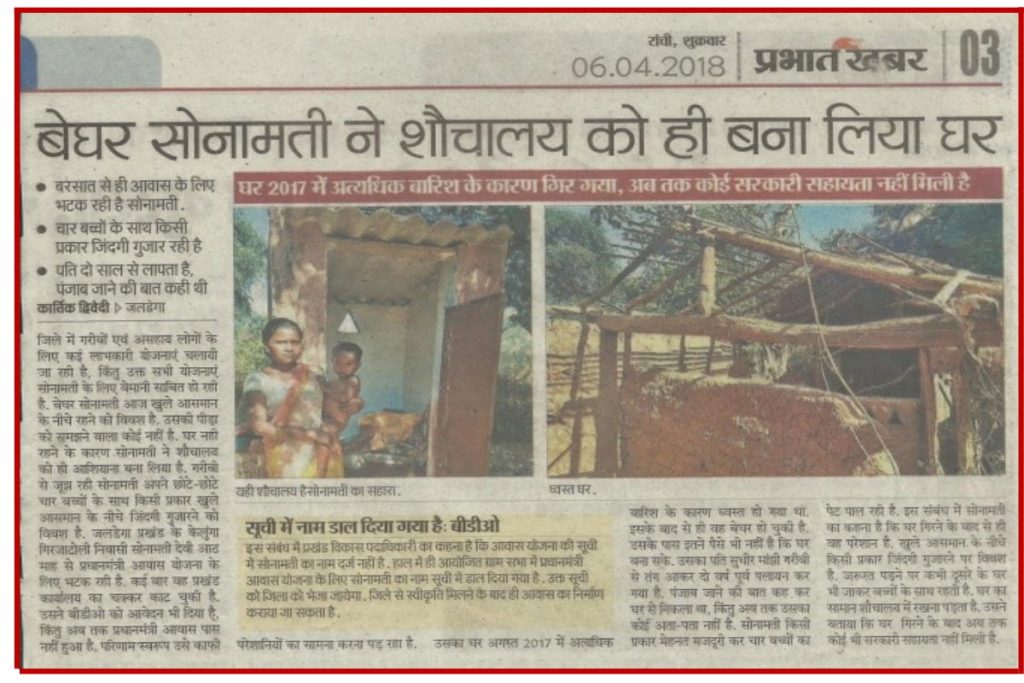 Sonamati Manjhi- a woman belonging to the Toori caste[1] – lives in Keluga village (Girja Toli) in the Jaldega block of Jharkhand. A marginal farmer with a meagre 2 dismil of land[2], she would sustain herself and her family by making bamboo baskets. Due to their abject poverty, they lived in a mud house which was destroyed by heavy rains in August 2017. Her financial condition was too poor to repair or reconstruct the house, and her husband abandoned her to fend for herself and her children.

With no roof over their heads, Sonamati and her four children had to put their meagre belongings in a newly constructed toilet shed, cook and eat in the open under the shade of a tree and sleep in their neighbour’s house.

On learning about her situation, the members of the Gram Sabha and the social leader of the area- Cristopher Topo- decided to intervene by applying on her behalf to the Pradhan Mantri Awas Yojana (PMAY)[3]. Though her application and the requisite documents were submitted to the Block Office, they neither scrutinized it nor helped her in any way. Sonamati herself went several times to learn of the status of her application, however there was no response from the authorities.

With the continued apathy of government officials, Sonamati’s situation was taken to the media, and a local newspaper- Prabhat Khabar– published her story on April 6, 2018.

The publication of her story spurred the government into action, and the very next day the Block Development Officer came to investigate her housing situation. He directed the Gram Sabha to prioritize her request, post which he would sanction her house under the PMAY.

Sonamati’s life is gradually improving. With her inclusion as a member of Nari Shakti, a women Self-Help Group focusing on the ultra-poor, her financial status has improved. She was also sanctioned a new goat shed under the MGNREGA programme[4], work on which is currently ongoing.

Sonamati’s story highlights the apathy and lack of government accountability to the vulnerable. Without the support of the Gram Sabha and the civil society, Sonamati would have found it extremely challenging to navigate the complicated bureaucratic process and repeated follow-ups to access a fundamental human right- the right to adequate housing.

[1] Falling under the Scheduled Castes

[3] A social welfare programme by the Government of India to provide housing to the rural poor.

[4] Flagship scheme of the Government of India which guarantees the Right to Work by providing 100 days of paid employment in rural India.

*This case study was contributed by Life Education and Development Support (LEADS).