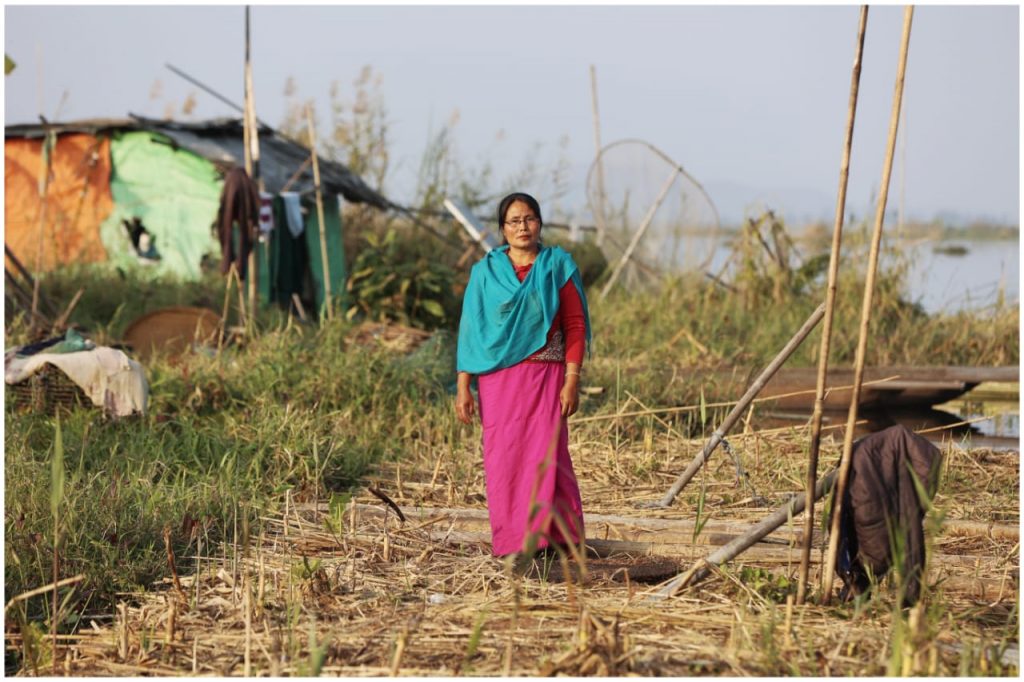 ﻿Kiranbala Khoirom is 48 years old and belongs to the fisher community of Champu Khangpok Village in Loktak Lake- the only floating village in the world and also a Ramsar Site[1] and home to the endangered brow-antlered deer (called Sangai locally). The Keibul Lamjao National Park is also found here. The woes and uncertainties for her and her community began with the commissioning of the dam on Loktak Lake in 1983.

The construction of the dam led to the submergence of the surrounding paddy fields and land in the lake area, with a direct impact on their homestead and livelihood. The rising water level made it difficult for them to cast their nets like before and they could no longer go fishing. Additionally, the dam altered the entire ecosystem of the lake. Popular local species of fish, such as sareng, ngato and pengba, dwindled as the river flowing from the neighbouring country of Myanmar got blocked by the dam, affecting the spawning of fish in the lake. Further, they could no longer depend on the natural edible vegetation that the lake provided as it disappeared due to the rising water level of the dam.

The floating biomasses or phumdis on Loktak Lake are home to villagers who are predominantly members of the Scheduled Castes. According to Kiranbala, in 2011, the Loktak Development Authority declared these floating huts as illegal settlements by giving only 4-5 days’ notice. The authorities set fire to many of the floating huts on the pretext of cleaning the biomasses, resulting in villagers losing their fishing equipment, books and uniforms of children, and all their lives earnings and savings, creating a gloomy and uncertain future for the community.

Rendered homeless and fearing for their lives, the community (numbering around 1300) set out on foot to find support, running from pillar to post, and finally came to Imphal to protest but were met with police repression. They attended meetings to voice their concerns, but the State turned a blind eye and they were met with further destruction of property. Without proper food, clothing and shelter, they decided to return to Loktak and rebuild their lives. For a simple fisher community, it became a harsh reality of life with limited resources to face the challenges before them.

In this whole process, Kiranbala’s 3 children (like the rest of the children in the community) lost a year of education. Unwilling to compromise on the education of their children, the community took on a shared responsibility by starting a new school for younger children and sending the older children to boarding schools.

For the last 3 years, the community has been observing a lean season from November 30 to the end of February to enhance fish spawning in the lake. This is usually when the rest of the State enjoys the harvesting season.

According to Kiranbala, it is extremely wrong on the part of the State to carry out eviction of innocent villagers from the Loktak lake. The community’s livelihood is inextricably linked to the lake, and any policy or programme affecting the lake also impacts them. The community experiences ever-rising insecurities and uncertainties around the lake and surrounding areas, further disrupting their livelihood. Their key demand is inclusive participation in the development policies around the lake- to voice their concerns and opinions, and be heard and included in these decisions as they have a direct implication on their lives and livelihoods.

[1][1] Any wetland site which has been listed under the Ramsar Convention that aims to conserve it and promote sustainable use of its natural resources.